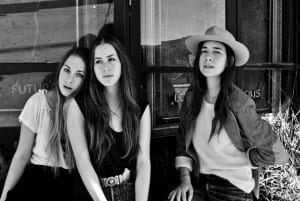 You can count on one hand the number of tracks Haim has recorded. A few live cuts and some remixes extend their catalog, but it’s basically just this past summer’s Forever EP and fall’s Don’t Save Me single. It’s surprising, then, that this LA synth-pop trio has been touring with some of the biggest acts of the day and earning rave reviews from critics who have called the sisters Haim up-and-coming artists to watch.

Haim, formed by sisters Este, Danielle, and Alana Haim, toured with Mumford & Sons last summer, and are joining the folk rockers for a tour this month that includes sold-out shows at the Patriot Center next Wednesday and Thursday (followed by a gig at U Street Music Hall on the 14th). This winter, Haim was opening for the indie rock band Florence + The Machine at arenas across the UK.

The sisters have been performing as Haim since 2007, but when it came to writing and recording, the pieces weren’t falling into place. They’re all 20-somethings now, but back then school commitments wouldn’t allow the time to get into the recording studio.

It was only three years ago that the girls could get on the same page. Este, the eldest, was wrapping up a double-time course load at UCLA to graduate early; Alana, the youngest, had just finished high school; and Danielle, who was a backing musician for Cee-Lo Green and Rilo Kiley’s Jenny Lewis, had stopped touring.

“Finally when we all didn’t have distractions, we just buckled down and decided if we’re going to do it, it has to be now, we can’t really wait anymore,” Este said.

An intensive year of writing followed, then came the July 2012 release of Forever, an EP of folk- and R&B-infused electric pop that would become the first recording for sisters who had spent all their lives making music together.

They are the children of artists and music-lovers, but Alana says the girls were never forced to be musicians. Their father bought a few cheap musical instruments and gave them the chance to find their niche, recognizing his daughters’ talents.

“My mom was an art teacher, so if art was our thing then my dad would have shown up that day with a bunch of easels and paints, but we didn’t,” Alana says. “We went the music route.”

With dad on the drums and mom on guitar, the Haim family formed the band Rockinhaim and played classic rock and Motown covers.

Alana admits that she thought playing in a family band was “super nerdy” back then, but it’s the type of artistic enrichment she’s glad she had early on.

Now the sisters, each multi-instrumentalists who have performed in groups outside of the family, are making their own music. It’s a unique situation to be in a band with one’s sisters, and Este says those family bonds give the sisters equal footing. They collaborate. They write together. They share secrets, friends, and the stage.

“It’s more fun. To look to my right and see both of my sisters playing, it’s a really special feeling,” Este said. “There’s no ego. We’re all each other’s biggest fans.”

Haim was named to the top of the BBC Sound of 2013 list, a rarity for an American act. They thought it was a joke or a prank when they heard the news. They were simply honored to be among an accomplished list of nominees and to learn that they had won felt surreal, Este said. The title means that music industry experts expect big things from the trio this year. When asked what the propitious year might hold, recording was at the forefront.

“I want to release the best record that we possibly can,” Este said.