After a defensive struggle for most of the first period, MEH’s Jacob Lechner notched a goal off an assist from Henry Middlebrook at the 6:48 mark to give his team a 1-0 lead.

Battlefield came back with a fury, however, shutting down MEH’s offense and reeling off six straight goals over the next two periods to go up 6-1 early in the 3rd stanza. Battlefield players Owen Spicer, Alex Harvey, Mike DeJesus, and Jake Foster each scored one goal and Hunter LeClair tallied two. 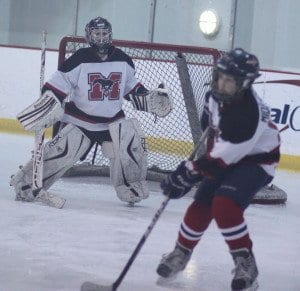 MEH finally regained its footing in the third period, stiffening its defense and sharpening its breakout to allow more shots on goal. With four minutes remaining, Battlefield’s Noah Zwieg was called for hooking, sending him to the penalty box for two minutes and allowing MEH to stack an improvised power play line of Alec Reusch, Jackson Oppel, Brendan Bernstein, Cole McDowell, and Jack Meteyer. Determined to score, the five MEH players hammered Battlefield goalie Dominic Pinnial with shot after shot and finally scored when Bernstein beat Pinnial following passes from McDowell and Reusch. With 4:07 remaining, the score was 6-2.

Reenergized, MEH put intensive pressure on the Battlefield puck carriers, forcing turnovers in the neutral zone and carrying it back into the opposing zone. Pinnial repeatedly turned away MEH’s efforts, however, eating up precious seconds. Entering the final minute, MEH made one last run to tighten the score. Deep in the Battlefield zone Ethan Rosenberger tipped the puck to Andrew Fischer, who delivered it to Jack Meteyer for a slap shot over Pinnial’s blocker, making the final score 6-3.

MEH goalie Jack MacKinnon played a stellar game, making key stops to stanch the bleeding early in the third and allow his team to recapture its respectability.

The night cap of the first “Hockey Night in Falls Church” between George Mason High School and Bishop O’Connell was postponed due to icy road conditions. That game will be rescheduled for February. The GMHS club next plays Woodson tonight at Kettler Capitals Iceplex.