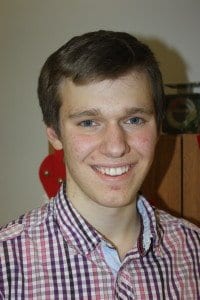 Waters, now in his freshman year majoring in voice at Rice University in Houston, Texas, graduated from Falls Church’s George Mason High School in June 2011 after his stunning regionally- and nationally-acclaimed performance as the lead Jean Valjean in the high school’s November 2010 production of “Les Miserables.”

In the months following his memorable performance, Waters organized a musical benefit of fellow students at Mason while narrowing his nationwide search for the best university music program for him to Rice. But early in the spring of 2011, something terrible happened.

He was diagnosed with cancer.

To be specific, he had rhabdomyosarcoma, a rare cancer that often strikes teens his age.

Operated on and placed into aggressive chemotherapy and radiation treatments immediately that would take a year to complete, Waters lost his hair, but that did not deter him appearing at the June 12, 2011 annual Cappies Gala at the Kennedy Center honoring all of the best high school dramatic and musical productions from the previous school year.

He was announced as the winner of the best male vocalist and a video was played on a large TV screen of his singing the haunting prayer, “Bring Him Home,” from “Les Mis.” The Mason High production was nominated for seven Cappies, but it was Waters who brought down the house when he came to the stage to accept the award after it was announced he was fighting cancer.

(Last summer, the Mason production was named No. 1 in the U.S. with an American Prize, one of a series of such honors presented at high school, college and professional levels.)

Waters sang for the annual Falls Church Relay for Life rally against cancer, as he did last June, as well. At his high school graduation in June 2011, he sang a solo at the Constitution Hall ceremony for his high school classmates and their families that proved highly emotional.

Upon the completion of his cancer treatments in early 2012 and with the disease in remission, Waters revived his plans to attend Rice. He enrolled last fall, jumping right in with a series of recitals and classes and a role singing in John Musto’s opera, “Volpone.” He also nailed a part in Handel’s “Ariodante,” to be performed this spring.

In short, as he told me at the News-Press office during an interview over the holidays, being at Rice and studying one-on-one voice instruction under Stephen King, “one of the two or three foremost coaches of professional singers in the world,” he loves his new life.

King “takes on an undergrad like me only once every two or three years,” Waters said.

“I went to Rice hoping I could make my mark on the music world,” he said, but quickly he found that the combination of the expert instruction and the college environment of interaction with fellow students “feels a lot better than I thought it would.” He beamed as he said that he was “exactly in the right place.”

Bubbling with enthusiasm upon his return home over the holidays last month, he spearheaded the involvement of fully 30 of 55 Mason High students who’d been in the November 2010 production of “Les Mis” to form a “flash mob” at the entrance to the theater in the Tysons Corner Mall where the film production of the musical was premiering, and to sing a short medley of tunes from it.

It gathered a large crowd. “The idea was to encourage people to see the film,” Waters said, who added that he liked it very much.

(A video of that memorable incident, done despite threats from local security personnel, can be seen on the News-Press website).

Waters said the chances of the kind of cancer he had never coming back increase spectacularly if it does not return within 12 months after going into remission. It is now approaching one year.

The ordeal, he said, “has helped me to appreciate the beautiful things in life more.”

Waters, a tenor, told the News-Press that his vocal instructor, King, focuses on bringing out the contours of each individual voice, to make it the best it can be.

“It’s a process of uncovering what your real voice sounds like, as opposed to unconsciously mimicking others,” he explained. “In my case, I’m discovering that my voice is bigger than I thought it was,” and that was partly because, in high school, mics are used to amplify voices in musical productions that are never used in real opera.

Betraying his modesty, he grinned when he said his voice has “a heroic tone.”

Sam Waters’ singing career as a child growing up with his younger brother, Tyler, in Falls Church began when he was being prepped to sing a “Silent Night” solo at age 7 for his church’s Christmas pageant.

It was immediately discovered that this young man could really belt it out and did not need a microphone.

In 2007, he entered a regional competition to sing the national anthem at a Nationals baseball game and won. One early evening late that summer, he took to the field, grabbed a mic and calmly sang a powerful, straightforward rendering of the national anthem, with about 20,000 fans responding with considerably more than the usual amount of appreciation for such a performance.

Standing on the field and singing, Waters said, “I thought of myself singing in my bathroom to no faces” (as he so often does), he said.

But singing in front of all those people, and hearing their applause was very fulfilling, he said. “I thought to myself, ‘You can do this for a living.’”

A photo of that performance appeared on the front page of the News-Press in September 2007. A month later, Sam, his brother Tyler and a third person went door to door on Halloween in Falls Church singing their “trick or treat” greeting as the “Three Tenors.”

He expressed appreciation to his parents for their support, as he began private voice lessons.

“I grew up in a household of Elvis Presley and James Taylor,” he said, but when he began lessons during his sophomore year of high school, he was singing arias from operas and art songs.

In his junior year, in 2009, he won the prominent singing role of Seymour in the George Mason High School production of “Little Shop of Horrors.”

But his vocal instructor, oratorio tenor Robert Petillo, was introducing Waters to the classical repertoire “and I fell in love with the raw power of an operatic voice,” Waters said. “Unamplified, it grabs you in a human way.”

It leads, he added, “to a deeper emotional understanding of the music. It involves really powerful emotions.”

At this point, he said, “I feel I am created to do this.” Given the chance, the number one part he would like to sing would be that of Rodolfo in Puccini’s “La Boheme.”

Before heading back to Rice after the first of this year, Waters and an opera-loving friend trained to New York where, in the course of a single day, they soaked in a five-hour production of both parts of Berlioz’ “Les Troyens,” followed by a full production of Rossini’s “The Barber of Seville.”

Yes. “that was a lot of opera” for one day, he texted me. There was an unmistakable lilt in the tone of the comment that confirmed he really loved it.