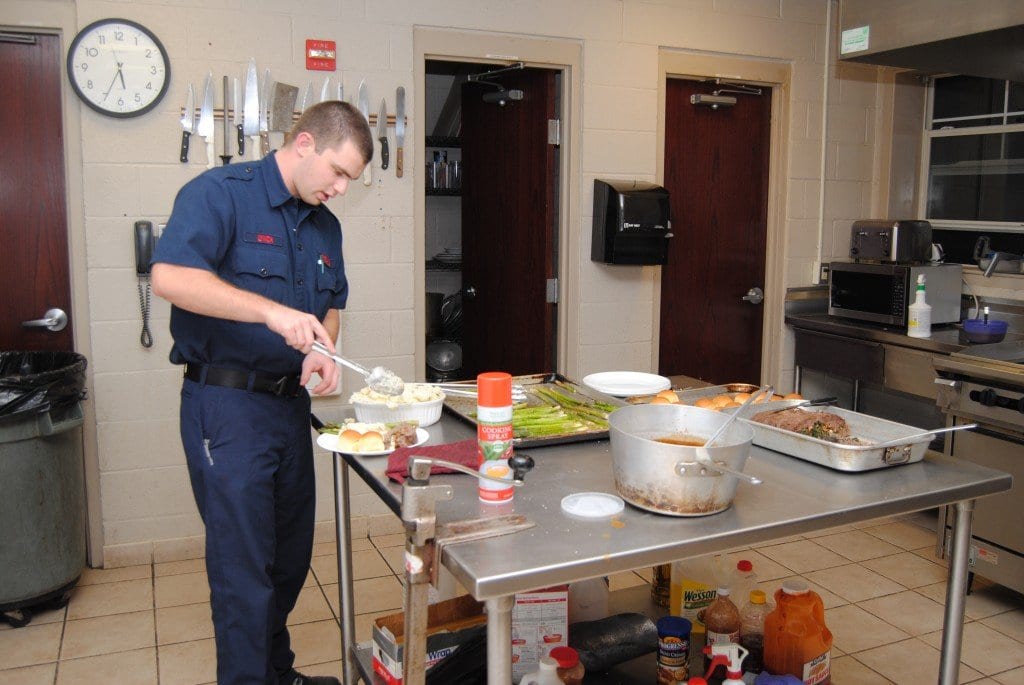 While many in Falls Church will be giving thanks and celebrating with loved ones around a bountiful meal, the firefighters of Falls Church’s Fire Station No. 6 will be at the ready as the City’s first responders in the case of fire or medical emergency. Though these uniformed men and women won’t be home for the holiday, they plan to keep the City safe and still break bread in honor of Thanksgiving.

The A-shift firefighters, led by Captain William Bennett and Lieutenant Jacob Johnson, will be working 24 consecutive hours this holiday, from 7 a.m. on Thanksgiving morning (when some are dragging themselves out of bed to get an early start on the cooking ahead) to 7 a.m. the following morning (when early birds are waking from tryptophan-induced slumber).

24-hour shifts are typical for these firefighters. The three shifts of Arlington County firefighters who staff Falls Church City’s fire station work year-round in cycles of three 24-hour shifts, with a day-long break between those shifts, followed by four days off.

Considering the long hours, firefighters must find time within their work day to enjoy a hearty dinner. A large kitchen in the fire station is equipped with industrial-size ranges and a few refrigerators to provide the dozen or so firefighters on a given shift with the right tools to make a group meal.
As City of Falls Church Fire Marshal Tom Polera explained, firefighters contribute a few dollars apiece, out of pocket, each morning for food.
Tasks like shopping for ingredients and cooking the meal are divided amongst firefighters on the shift. 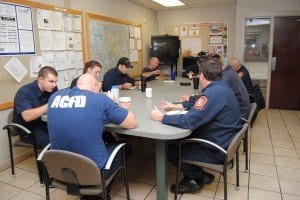 On one weekday evening this month when the News-Press visited Fire Station No. 6, the firefighters of the A-shift gathered around a large communal table promptly at 5:30 p.m. for a meal of stuffed meatloaf, asparagus, mashed potatoes and rolls.

Some of the firefighters have earned a reputation for their cooking skills.

Both Riordan and Captain Bennett mentioned fellow firefighter Joe Marr’s kitchen prowess. As Bennett pointed out, Marr does, however, cook the healthier of the meals that come through the fire station kitchen.

“I cook like grandma did – a lot of bacon grease,” Bennett said, and volunteered a cup of salvaged bacon grease in the fridge as evidence of his particular culinary proclivities.

But when it comes to the Thanksgiving meal, there is no king of the kitchen, and all the firefighters lend a hand in cooking a celebratory meal with all the trimmings.

“We spend the day cooking a lot of food,” Bennett said.

“A big Thanksgiving dinner at the firehouse is a tradition,” Riordan said. He added that sometimes the firefighters’ families and first responders from neighboring jurisdictions are invited for the meal. This year, Fire Station No. 6 will host some companies from Fairfax County for the big dinner.

While the firefighters plan to celebrate the holiday as best they can, their first priority is keeping the citizens of Falls Church safe this Thanksgiving. It’s a holiday with its own unique fire hazards, according to Polera.

He mentioned what are known as “food on the stove” calls, instances when food left unattended starts a fire. Such events certainly aren’t exclusive to Thanksgiving, and are common any day of the year, but the “food on the stove” danger is greater when long-cooking foods like turkey are in the oven.

Polera cautioned cooks using deep fryers or smokers to carefully read the instructions for such turkey-cooking devices, as improper use can result in fire. But even cooking turkey in the conventional manner can be dangerous, Polera said, as spilled grease on a hot stove surface can cause a flash fire.

An attentive cook, a clear workspace, and a working smoke alarm are some recommended ingredients for happy holiday cooking. For more tips, visit the National Fire Protection Association online at nfpa.org.