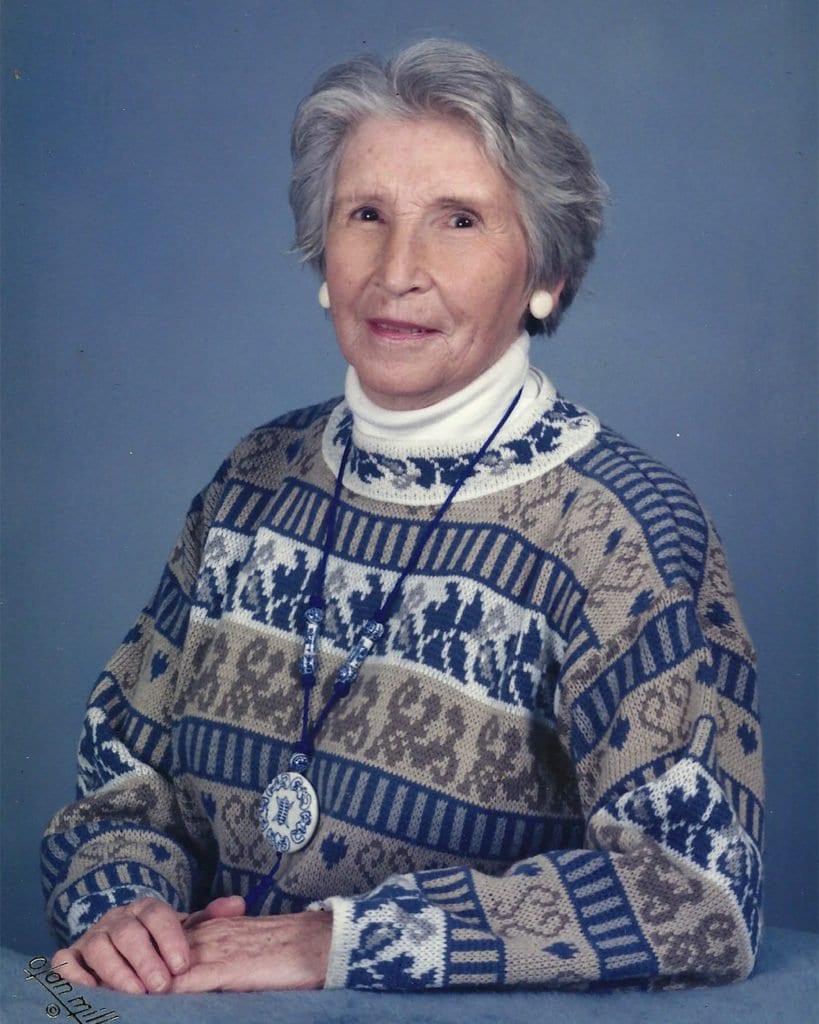 Frances Waterbury Richardson, who served as a Red Cross volunteer in North Africa, Italy, France, and Germany during World War II, worked for the US Information Service in India, taught English at Zhongshan University in Guangzhou, China, and facilitated elections in Bosnia, died on Jan. 30 in Vienna, Virginia. She was 100.

Her daughter Alice Christine Williamson confirmed Fran’s death at the home of her son Raj Lee Richardson, where she lived for a decade.

Richardson identified growing up during the depression and seeing war first hand as “the defining experiences of my life.” The war, in particular, further developed her natural interest in and caring for people.

“I’m incurable. I am a hopeless incorrigible. My failing is people. I like them. I’m fascinated by them,” she wrote in a 1943 letter home from her post overseas. “I am intrigued by the drama of human beings — those who are fighting this war — so many people, of so many tastes, backgrounds, talents, all thrust together for one purpose.”

She repeatedly sought to help and encourage others, among them, Kuldip Nayar, now a veteran Indian journalist, syndicated columnist, human rights activist, author, and ex-High Commissioner of India to the United Kingdom, and Charles H. Twining, a Foreign Service officer who became US Ambassador to Cambodia and several other countries. Richardson sponsored a young French orphan bringing him to America following the war in Europe and later housed her Chinese students and paid tuition for one young man to pursue graduate studies in this country.

A writer from elementary school on, she penned letters, reports, papers, and stories on subjects ranging from improving Red Cross recreation services for hospitalized soldiers to life in Uganda. She was published in a wide variety of domestic and international publications—from the Bedford Times Register, her hometown newspaper in Ohio, and Over Here, a post-VE Day American Red Cross periodical, to National Geographic and the New York Times.

Richardson earned her bachelor’s degree in journalism from Kent State University in 1939, the first woman to do so, and her master’s degree from the Medill School of Journalism at Northwestern University in 1947. While at Kent State, she interviewed Eleanor Roosevelt when the First Lady visited Akron in November 1938 and Richardson was on special assignment for the Akron Times-Press.

She was born in Cleveland, Ohio on June 17, 1917 (“Watergate Break-in Day,” she would later note) to Irving Waterbury and the former Dorothy Moses, the first of four children and the only girl. When Richardson was five, the family moved to Bedford, Ohio, where her father owned and operated a lumber mill.

Reminiscing about Bedford, she wrote in a 2007 retirement community newsletter, “In the mid-thirties, the Street was our world. Lined by maples, small two-story brick houses, our Street sloped gently down to the town’s main road. Beyond our Street lay the rest of the world…”

From the time she left home for college, Richardson explored that world, ultimately circling the globe five times and visiting more than 100 countries on six continents, often encouraging family and friends to join her. She made seven trips to China alone.

Richardson married Neil Richardson, an American businessman, in 1949 in India and for the next 28 years, until her husband’s death in 1977, lived in Uganda, Sudan, and both coasts of the United States while the couple raised their three children. In addition to son Raj, daughter Alice, son-in-law James Williamson, and widowed daughter-in-law Linda J. Heffner, nine grandchildren and two great-grandchildren survive Fran. The Richardson’s second son and Dr. Heffner’s husband, Douglas Kent, died in 2002.

At 46, Richardson participated in the 1963 March on Washington and heard Martin Luther King, Jr. deliver his “I Have a Dream” speech from the steps of the Lincoln Memorial. At 64, she began teaching journalism at Marymount University in Arlington, Virginia, remaining there as an adjunct professor for five years. At 69, Fran studied Mandarin and two years later traveled to China and Zhongshan University where she taught English until she was forced to leave the country following the Tiananmen Square massacre in 1989.

At 78, she rafted the Colorado River with Raj, explaining to an astonished tour guide that she had to make the trip before she got “too old.” At 80, Richardson journeyed to Bosnia as a supervisor under the Dayton Accords, registering voters in the spring of 1997 and then returning in the fall to observe the elections on behalf of the Organization of European Security and Cooperation.

“I have a great curiosity about the world. After all these years I still worry about the state of the world, and doing something useful, worthwhile, which will make this world a better place. I can see that became my guiding principle,” Richardson wrote in a 2004 biographical sketch. Celebrating her 90th birthday in 2008, Raj asked Richardson what she wished for. Raising her glass of champagne, she answered without hesitation, “Obama.”

She also had an abiding belief in volunteering. While living in Falls Church, Richardson was active in the League of Women Voters, For Love of Children, the American Association of University Women, Citizens for a Better City, and the YWCA. She helped found the Falls Church Housing Corporation and was instrumental in establishing what is now the Falls Church Homeless Shelter. Richardson also created the Washington Program in National Issues (WPNI), a Washington semester program for Kent State students. A WPNI award now bears her name and is given annually to a student who has participated in the program.

In a 2005 letter, she wrote: “Only in America, are there so many volunteer groups, helping others in so many ways. This willingness to help is in the American character—in most individuals in their willingness to help others to the inconvenience of themselves. I never experienced this living elsewhere.”

Richardson received recognition for her writing and her volunteerism. Kent State honored her as a William Taylor Distinguished Alumnus for freelance and contract writing and teaching journalism both in the United States and China. Her alma mater’s School of Journalism and Mass Communications further recognized her in 2005 as a Woman of Distinction.

In 1998 the Falls Church Chamber of Commerce gave her the Carroll V. Shreve award, acknowledging her key role in the League of Women Voters as the author of its Handbook for Leaders of Organizations, later translated into Spanish and Korean, as well as her work on behalf of voters in Sarajevo, Bosnia.

On Memorial Day 2004, the Women in Military Service for America recognized her in a ceremony at Arlington National Cemetery where Richardson represented the American Red Cross.

Her family will announce plans for a memorial service and donations in her memory at a later date.